The Next Wave of Children’s Bookstores: Part One

This is the first in a two-part series, providing an in-depth look at new and soon-to-open children’s bookstores. 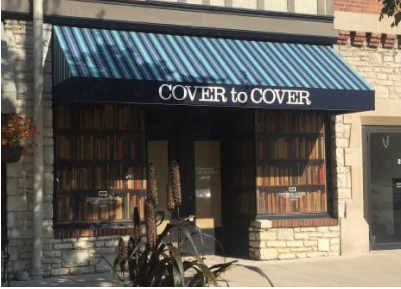 The number of independent bookstores in the U.S. has risen 35% since 2009, according to American Booksellers Association CEO Oren Teicher. While the bulk of the roughly 2,320 ABA bookstore locations comprise general bookstores, children’s specialty stores have also contributed to the increase. In recent years, not only have new children’s bookstores opened around the country, but established stores like 37-year-old Cover to Cover Books for Young Readers in Columbus, Ohio, have changed hands. New owners like Melia Wolf are investing heavily in their businesses. Following her purchase last summer, Wolf closed the store and is in the midst of moving it to a new neighborhood, where it will reopen in January.

“In general, people are feeling more confident about getting into retail bookselling,” said Donna Paz Kaufman of the Bookstore Training Group of Paz & Associates, who is herself opening a general bookstore in Fernandina Beach, Fla., called Story & Song Bookstore Bistro. Kaufman points to factors like a strong economy and a need to fill spaces left empty by the closure of chain bookstores, including Borders and Hastings Entertainment. Kaufman regards this as “a marvelous time” to open a children’s specialty bookstore. “Millennial parents are registering for books for shower and new baby gifts,” she noted. “It’s wonderful to see since they’re the first truly wired group to start families.”

Now We Are Two, or Three

Over the past few years, a number of general booksellers have added second and third locations. But New York City’s Books of Wonder is the only children’s specialty bookstore to do so recently. In September, the 37-year-old bookstore opened a second store on the city’s Upper West Side. Owner and founder Peter Glassman views the new 2,600 sq. ft. store as insurance should he run into difficulties renegotiating the lease for his long-time base on West 18th Street, which has two years left. Given the state of the economy, Glassman also felt that it was a good time to expand, particularly into one of the city’s most densely populated areas rich with families. This is the first children’s bookstore to open in the neighborhood since Eeyore’s closed in 1993.

Beyond that, Glassman, who is 57 years old, has begun thinking about leaving a children’s bookselling legacy. For him, the new store is only the beginning. “I’d like to have more stores in the New York metropolitan area,” he said. “I don’t want Books of Wonder to die with me. By opening additional stores [in New York and New Jersey] and showing their viability, I want to attract someone to invest.”

Other bookstores, like Books Unlimited, a 3,000 sq. ft. used and new general bookstore in Franklin, N.C., have grown by opening separate children’s stores near their flagship locations. In July 2016, owner Suzanne Harouff launched Unlimited Books for Kids, a small children’s store that carries new books only two doors down from her main store. This summer she significantly increased the new store’s square footage so that it is now closer to half the size of the main store. She is using the added space for back office functions as well as storytimes and other activities.

“The store is doing amazingly well,” Harouff told PW. “The kids are so excited. One boy said, ‘This store is just for me.’ ” When children’s books were in a 250 sq. ft. room in her main store, parents would leave kids there while they did their own shopping. When kids saw a book they wanted to buy, their parents would frequently turn them down. At the new store, parents shop with their children. As a result, sales have significantly increased. Strong sellers include Robert Beatty’s Serafina books (Disney-Hyperion), Erin Hunter’s Warriors series (HarperCollins), and the Hardy Boys (Grosset & Dunlap), along with toys, games, gifts, and puzzles.

In late August, Harouff, who has owned Books Unlimited for the past 14 years, put both stores on the market. “I’m just ready for the next adventure,” she said. “I have two grandchildren in Texas. I want to get stamps on my passport.” She’s willing to wait until she finds the right buyer, who will grow both the 34-year-old flagship store and its sister children’s bookstore.

Christine Onorati, owner of WORD Bookstores in Brooklyn and Jersey City, said, “We decided to break out kids’ books, because we know that [they] are one of the most profitable areas of our stores, and we just didn’t have the room to grow our kids’ section to what it deserved in Brooklyn.” Issues over city permits have delayed the opening of WORD KIDS, a 650 sq. ft. children’s specialty bookstore, which was to have opened two doors down from the Brooklyn store last spring in conjunction with the Brooklyn store’s 10th anniversary. The new space will enable WORD to carry more children’s books and host more kids’ events; the basement will be used for offices and storage for both Brooklyn locations. 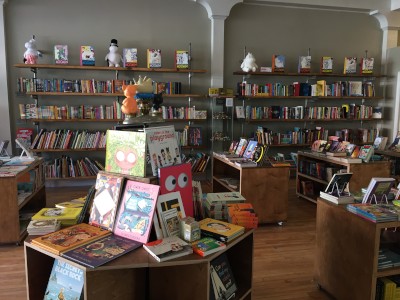 “Our kids’ section has grown very organically over the past 10 years to become one of our bestselling sections in perhaps the store’s smallest space,” D&Q’s publisher, Peggy Burns, has said. For her, it just made sense to give children a store of their own, particularly in such a family-friendly neighborhood. She is quick to note that the new store is not a comic bookstore. “We see it as a full-service French and English kids’ store,” she said.

Both D&Q stores stock a strong selection of graphic novels, including those by bestselling author Raina Telgemeier, along with other children’s and adult bestsellers. It’s important to Burns to promote books by other Canadian publishers like Groundwood Books, part of House of Anansi, at La Petite. “The indies have to support indies,” Burns said.

In addition to mixing comics and prose, the inventory at La Petite contains both French and English titles, and the store holds weekly storytimes in both languages. The store’s bestsellers reflect that same mix, ranging from Lemony Snicket and Matthew Forsythe’s The Bad Mood and the Stick (Little, Brown) to local Canadian author and illustrator Elise Gravel’s Une patate a vélo, Innosanto Nagara’s A Is for Activist (Triangle Square), Madeleine L’Engle’s A Wrinkle in Time: The Graphic Novel (Square Fish), adapted and illustrated by Hope Larson, and the YA series La vie compliquée (Les Malins) by Catherine Girard-Audet and Veronic Ly.

For some new booksellers, learning to drive is more than just a metaphor. They need a special license to operate a mobile bookstore. In mid-November Zsamé Morgan, who will launch Babycake’s Book Stack as a mobile bookstore serving Minnesota’s Twin Cities in spring 2018, went to Indiana to pick up the bookmobile that she is planning to convert. Originally, she had planned to open a bricks-and-mortar location in downtown St. Paul, next to a busy restaurant. “I decided it’s even better to go out into the community and not wait for people to come to me,” Morgan said. “Our motto was already ‘around the world in a book.’ We’re adding wheels to it.”

After her partner died, Morgan decided to open a children’s bookstore so that she could spend more time together with her now four-year-old daughter. But she has found the process slow going. She got a loan to buy the bookmobile and created a GoFundMe campaign in late August for $25,500. To date, she has raised less than $5,000. “I’ve been centimetering along,” said Morgan. “I’m determined to continue whether I get the money or not.” In terms of inventory, she doesn’t anticipate carrying any less stock because of her decision to go mobile. “We have a beautiful melting pot here in the Twin Cities. I want to specialize in carrying books that reach out to people who don’t necessarily see themselves on the shelf.” That means carrying board books to YA in a number of different languages, which reflect the many cultures in her community. 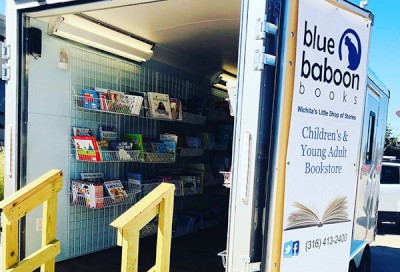 The Blue Baboon bookmobile serves book fairs and other local events throughout Wichita.

Sara Ornelas has no regrets about going mobile by opening Blue Baboon Books in Wichita, Kans., in July 2016 with a 7’ x 16’ custom-built trailer. “I always wanted a physical store,” she said. “I was a big reader when I was a kid, and I’ve been reading to my kids since the day they came home from the hospital. They’re eight and 10 now, and they like reading, too.”

Blue Baboon’s bookmobile services lots of one-day events like Donuts with Dads and ones on STEM and other educational topics. Ornelas also encourages area schools to order from the bluebaboonbooks.com website by offering an online discount. In December, Blue Baboon began expanding its school business by offering multi-day in-school book fairs that enable schools to earn books or fundraising dollars. Ornelas is trying to make it easy for overworked staff to schedule a book fair. “All the librarian needs to do is find the location,” she said. Blue Baboon provides shelving and tables, and of course books and a register.

Earlier this summer, Ornelas opened her first bricks-and-mortar store in a 1,700 sq. ft. temporary location in NewMarket Square. At the store, she holds at least one event a day, along with birthday parties and baby showers. “It’s all about kids and making them comfortable in a bookstore,” she said. Although Ornelas said that sales have been “good,” she’s undecided if she will look for a permanent bricks-and-mortar location or focus on her new book fair business instead.

Former educator Rebekah Shoaf relied on New York City’s House of Speakeasy and its mobile book truck to sell books when she ran out at Boogie Down Books’s inaugural event, a one-day free pop-up bookstore in the South Bronx at the end of October. The bookstore gave away 250 books in English and Spanish, including Tony Medina, Stacey Robinson, and John Jennings’s I Am Alfonso Jones (Tu Books), Adam Silvera’s They Both Die at the End (HarperTeen), and Paul Fleishman and Judy Pedersen’s Seedfolks (HarperTrophy), as well as its Spanish-language edition Semillas (Fondo de Cultura Económica). The event was part of Boogie Down’s Fall into Reading project for underserved teens, and included a series of book discussions last month at the Mott Haven branch of the New York Public Library.

Although Boogie Down doesn’t have a physical location, Shoaf is not sure that she wants one. She is considering going with a mobile bookstore, especially given the area’s high rents. “I’m not rushing toward a bricks-and-mortar space,” Shoaf said. “I definitely intend to continue this and to partner with other local organizations. The most important thing is to reflect the ethnic diversity of our community and the lived experience of the Bronx. I’m really interested in fostering community-based reading experiences and how we bring that experience to people that don’t have a bookstore.” Whatever her decision, Shoaf already knows that she wants to highlight Jewell Parker Rhodes’s Ghost Boys (Little, Brown, Apr. 2018) and Elizabeth Acevedo’s The Poet X (HarperTeen, Mar. 2018) in the spring.

For more about other new and soon-to-open bookstores, look for part two of this story on December 14.