FREE for All: NYPL Enhances Public Domain Collections For Sharing and Reuse 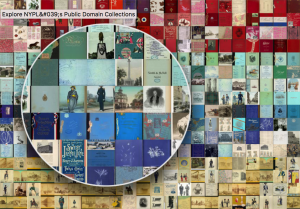 Today we are proud to announce that out-of-copyright materials in NYPL Digital Collections are now available as high-resolution downloads. No permission required, no hoops to jump through: just go forth and reuse!

The release of more than 180,000 digitized items represents both a simplification and an enhancement of digital access to a trove of unique and rare materials: a removal of administration fees and processes from public domain content, and also improvements to interfaces — popular and technical — to the digital assets themselves. Online users of the NYPL Digital Collections website will find more prominent download links and filters highlighting restriction-free content; while more technically inclined users will also benefit from updates to the Digital Collections API enabling bulk use and analysis, as well as data exports and utilities posted to NYPL’s GitHub account. These changes are intended to facilitate sharing, research and reuse by scholars, artists, educators, technologists, publishers, and Internet users of all kinds. All subsequently digitized public domain collections will be made available in the same way, joining a growing repository of open materials.

To encourage novel uses of our digital resources, we are also now accepting applications for a new Remix Residency program. Administered by the Library’s digitization and innovation team, NYPL Labs, the residency is intended for artists, information designers, software developers, data scientists, journalists, digital researchers, and others to make transformative and creative uses of digital collections and data,and the public domain assets in particular. Two projects will be selected, receiving financial and consultative support from Library curators and technologists.

To provide further inspiration for reuse, the NYPL Labs team has also released several demonstration projects delving into specific collections, as well as a visual browsing tool allowing users to explore the public domain collections at scale. These projects, which suggest just a few of the myriad investigations made possible by fully opening these collections, include: