What Authors Need to Know About the New Tax Bills

It’s a fast-moving target, but our lawyers and staff in New York and Washington are analyzing the proposed tax bills to see how they will affect authors. As we await a final Senate bill, given the amount of confusion, we wanted to let you know where things stand right now.

The principal changes to individuals’ income taxes proposed by both the House and Senate bills are 1) changes in tax rates, 2) the elimination of many specific, itemizable deductions and credits, and 3) the increase in the standard deduction. These changes are intended to streamline personal income taxes by limiting the number of those filing itemized deductions. It will make filing returns simpler for many taxpayers, and will benefit those who rely on the standard deduction. However, it will penalize those who currently have high deductible expenses, such as medical costs, dependent child care, and high local and state income and property taxes.

The types of itemized deductions and credits to be repealed differ somewhat under the Senate and House bills, and those differences are described below. Neither bill, however, would repeal self-employed writers’ ability to take standard business deductions—a source of some confusion since certain individuals who file as employees, such as “qualified performing artists,” would no longer qualify for unreimbursed business expense deductions under the proposed bills.  This provision is applicable only to employees, and not freelancers.

Authors who file as self-employed individuals would still be able to deduct costs like any other business.

Here is Where We Are in the Process

The House introduced, voted on, and passed House Bill H.R.1, the Tax Cuts and Jobs Act. The Senate introduced its own separate bill that differs in many respects, but which similarly reduces tax rates, removes certain types of deductions, and is also meant to simplify taxes to some extent. According to the Congressional Budget Office, the House bill is projected to increase the national deficit by $1.7 trillion over the next decade, while the Senate bill would increase it by $1.4 trillion. The Senate bill (which has now been approved by the Senate Budget Committee), is currently being amended to meet the demands of certain Senate Republicans. The Senate leadership hopes to bring the bill to vote later this week, probably Friday. The Senate and the House ultimately must vote on the same bill for it to become law so if the Senate votes to approve the bill, the next step is either for the House to vote on the Senate bill (and reportedly there is some pressure for it to do so), or the two houses must negotiate a compromise “conference bill.”  Once the identical bill is adopted by both houses, it will be sent to the President for signature and becomes law.

The provisions that might be of interest to freelance authors are described below. 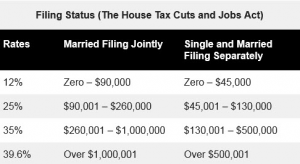 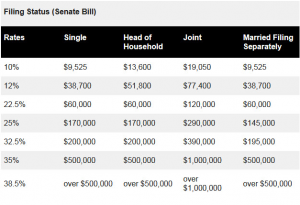 If you have concerns about the bills, you can contact your local representatives. Many thanks to Robert Pesce CPA and his accounting firm, Marcum LLP (whose name you may recognize from our tax seminars), as well as our lobbyists at American Continental Group, for their help in summarizing the bills.