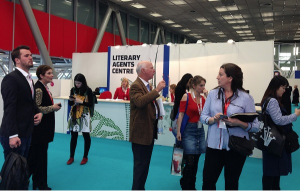 photo: Dealmakers and scouts gather to talk trends at the rights center at the Bologna Children’s Book Fair.
article by Rachel Deahl, with reporting by Diane Roback, Mar 28, 2018 for Publishers Weekly

While there may not have been a single book that agents and scouts were buzzing about in the rights center at this year’s Bologna Book Fair, insiders were not at a loss when it came to identifying trends in the marketplace. Among the more notable takeaways were the fact that middle grade fiction remains hot, and the political upheaval in the United States—from movements like #MeToo to #BlackLivesMatter—is reverberating around the globe, and driving interest in titles, both fiction and nonfiction, that speak to this tumultuous moment.

Rachel Hecht, who runs an eponymous children’s scouting firm, said she’d been noticing an uptick in nonfiction titles addressing things like “feminism and activism.” Acknowledging that the hunger for these books is likely being driven by current events, Hecht said publishers are also reacting to the bestseller lists and what’s working in the market. Citing breakout successes like Good Night Stories for Rebel Girls and Angie Thomas’s The Hate U Give, Hecht said publishers around the globe are looking for books that address and grapple with diversity in myriad ways.

A film scout who specializes in children’s literature said that, on the screen side, there were a number of titles circulating (or just sold) drawing comparison to Netflix’s breakout series, Stranger Things. One such buzzed-about project is Rena Barron’s middle grade fantasy series Maya and the Rising Dark, which had just sold to Emilia Rhodes at Houghton Mifflin Harcourt in a three-book preempt for world English rights.

Barron is represented by Suzie Townsend at New Leaf Literary & Media, and made headlines last year when her manuscript, The Last Witch Doctor, became one of the most sought after titles to come up through the PitchWars contest (which offers authors an opportunity to showcase an un-published project).

Maya and the Rising Dark, New Leaf said, is a West African inspired tale. The middle grade series (which is unrelated to The Last Witchdoctor), is, per the scout, like Stranger Things “if the kids had magical powers.” It follows the titular heroine who, along with her friends, is on a quest to save her father. When Maya discovers that her missing parent is “the keeper of the gateway between our world and The Dark,” she and her friends must “unlock their powers” and venture into the Dark to “face mythological creatures set on starting a war.”

A representative from New Leaf explained that The Last Witchdoctor has evolved into a YA fantasy series and sold in a separate deal, which has not yet been announced. Details about the sale of The Last Witchdoctor will be released during the forthcoming London Book Fair, with the first title in that series set to become Barron’s debut. New Leaf noted that TLWD also features “West African inspired mythology and magic.”

The surge in content featuring Stranger Things-esque elements was something agent Fiona Kenshole at the Canada-based Transatlantic Literary Agency was also noticing. “SF is having its moment,” she said. Kenshole felt the appeal of such content was thanks to the Netflix series, in which a quartet of friends fight demonic creatures that exist in another dimension which can be accessed through various portals in their Midwestern town. (The alternate dimension in Stranger Things is, as in Barron’s MG series, called “The Dark.”) photo: Fiona Kenshole (r.) of Transatlantic Agency, meeting with Marzena Currie, a scout with Eccles Fisher Associates.

U.K. scout John McLay noted that YA titles seemed to largely be traveling “one way, [from] the U.S. to the U.K.” Middle grade is, he felt, quite strong in his native U.K. “[The Americans] do YA the best, and I think we do middle grade quite well.”

One recent trend, largely created by the international success of One of Us Is Lying by Karen McManus, is the emerging popularity of the YA thriller. Agent Rosemary Stimola, who reps McManus and sold One of Us Is Lying into 37 languages, was showing the author’s second book, Two Can Keep a Secret, which Delacorte will publish in January 2019, to foreign publishers for the first time here. “Option publishers have the first look, of course,” she said, noting that by Wednesday morning she had “already sold seven.” She said the book has shown publishers around the world that “there is an established market for the YA thriller.”

For the Bent Agency’s Molly Ker Hawn, the first priority of the day was the international interest she was fielding in a YA novel called All of This Is True, which just so happens to cite One of Us Is Lyingas its main comp title. (Bloomsbury will be publishing the book in the U.K. on May 15; in the U.S. it will be released by Harper, on May 30.) The novel, by Lygia Day Peñaflor, is told through interview transcripts and diary entries, and follows four teenage friends whose attempt to befriend their favorite author winds up yielding dire results. Hawn, who had just closed a new deal for the book with a Czech publisher, said she felt All of This Is True was speaking to an interesting and recent cultural moment, in which young readers have unprecedented access to beloved writers.

Aside from All of This Is True, Hawn said that she was also seeing an intense interest in middle grade titles. And, echoing some of her colleagues, she noted that co-agents she works with in the U.K. have been “spending a lot of money” on the books in the category.

For Jennifer Weltz at the Jean V. Naggar Agency, the fair season has brought an unexpected but welcome interest in backlist titles. With some of that interest being driven by film adaptations, Weltz said she was also seeing a rise in demand for classic children’s books.

Weltz, who oversees the estates of such children’s book authors as Alvin Tresselt and Roger Duvoisin, said that, in the past, Europe had not been a market for backlist picture books. No longer. “What’s being called the ‘vintage book market’ is growing,” she said, noting that European publishers are recognizing the fact that young parents, who grew up with certain classic picture books, are now interested in reading those same titles to their children.

On other fronts, Weltz noted that a wider embrace of diverse titles was opening doors for other kinds of backlist books. Emily Danforth’s 2012 novel The Miseducation of Cameron Post, which is the basis of a film that premiered earlier this year at the Sundance Film Festival, is an example. A coming-of-age tale about a young Montana girl discovering her homosexuality, the novel was not something Weltz was able to sell to a wide swath of international publishers when it was first released.

Now it’s a different story. Although Weltz admitted that interest in Miseducation is being driven in large part by its film adaptation, the book is also benefiting from a cultural shift around the continent. With younger editors in various European countries hungry for diverse titles, LGBT-themed content can travel across more borders, Weltz explained, making a book that was virtually unsaleable in large parts of Europe just a few years ago, a hot commodity today.