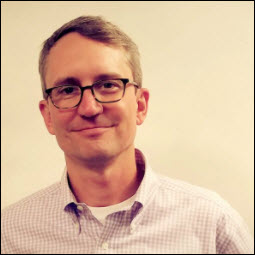 McCarthy is familiar for his years in publishing houses’ digital marketing developments and, most recently, as the partner of Mike Shatzkin in the Logical Marketing consultancy. Shatzkin appears on OptiQly’s team list, too, as strategist, and has written about the product as it neared its release.

Ruszala was last seen most prominently as president of NetGalley and presided over its international expansion, which included the March 2016 roll-out in Germany, prior to her new role with OptiQly. 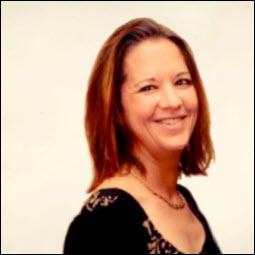 Both Ruszala and McCarthy now are working with OptiQly CEO Evan Schnittman and general counsel Jon Fine on this interesting project with the challenging name. Jess Johns is the marketing lead, Didier Jean Charles is chief of tech, and David Joseph is handling finance and operations.

Ruszala and McCarthy say the name carries elements of optimization and IQ, although as yet it seems hard for some to remember, spell, or understand.

But in talking with them, it becomes clear that the capabilities they attribute to OptiQly may well have potentially pivotal value for publishers—and eventually for traditionally and self-publishing authors, as well—if its promise is borne out in its execution.

“It may be a few months,” however, cautions Ruszala, before single-title users will be invited to subscribe. “We want to be sure we’re ready to service that community,” she says. 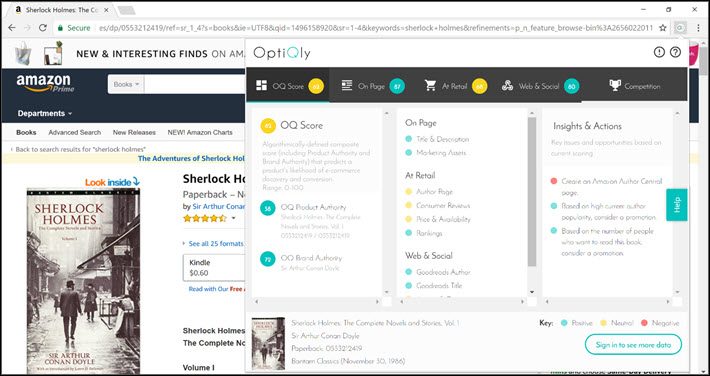 “What we’re good at doing is surfacing a lack of alignment. And that’s either a problem or an opportunity.”Peter McCarthy, OptiQly

To be simplistic for the sake of clarity, OptiQly can be thought of as a diagnostic tool for how a book is positioned, specifically in the Amazonian jungle of bookselling today. While the team would like to bring more retail platforms into play eventually—including Amazon’s international sites—Ruszala and McCarthy say the effort as OptiQly approaches its step-out into the marketplace is on US Amazon, the biggest books retailer out there.

Using an algorithmic assessment of factors including retail performance at Amazon.com, a book’s sales page, Web and social activity relative to the title, and performance by competitor titles, the program is meant to “promote transparency to improve marketing performance,” in the language of OptiQly’s early promotional copy.

The program then has instructional responses, telling a publisher how to adjust various conditions to enhance performance: how to fix it, in other words.

“We’ll launch sometime in mid-June with a product people can play with, experiment with,” Ruszala says, “with a subscription edition available sometime in August.”

“And what OptiQly does,” McCarthy says, “is enable the marketer to see 50 or so factors that affect the marketing funnel, data points, that we roll up with an algorithm into scores. The scores relate to an overall score and relate to your brand, too. Scores are zero to 100.”

Both publishers and authors will be interested in the distinction McCarthy is making there. What in OptiQly’s lexicon is the “product authority” is the score relative to how well the title is positioned. The second score is “brand authority,” a score relative to the author’s visibility. 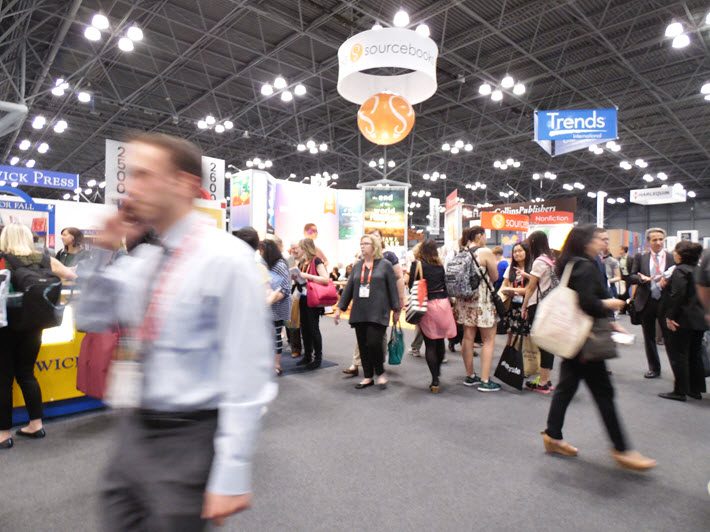 A central spot on the trade floor at BookExpo on Thursday (June 1). Image: Porter Anderson

“We’re looking at the impact of a lot of factors that are outside of Amazon and important to being discovered online.”Susan Ruszala, OptiQly

“We chose Amazon,” Ruszala says, “not for any particular affinity with Amazon but because there’s so much data available and their merchandising algorithm is so sophisticated.

“A lot of the early work around OptiQly came out of work Pete was doing to say, ‘What are the factors that cause my title to move more rapidly within the Amazon environment? What’s important to the way that they will start to merchandise a book?—in their emails or in advertising or in keyword marketing or on the site itself?'”

McCarthy says that rather than scraping data from sales pages as is done, for example, by the Author Earnings project, “We get 99 percent of our data from feeds, and doing just a tiny amount of scraping.”

“And it’s not just Amazon data,” Ruszala says. “We’re looking at the impact of a lot of factors that are outside of Amazon and important to being discovered online.”

At a more granular level, some of the factors OptiQly is said to parse include:

As McCarthy points out, all these and more are used by Amazon, itself. “The easiest way to explain it is to say that they work largely off of page views and conversion. They want to see that ratio. And a lot of the signals that indicate page views are the things Susan is talking about,” those outside signals such as social-media shares.

“Facebook links back to the product,” McCarthy says, “the number of shares out there that link back to Twitter, just shares in general. All of those things are going into defining page views as going up or down. Sales rank is going to tell you whether or not it converted.

“So what you want to see if you’re a marketer,” McCarthy says, “is alignment. What we’re good at doing is surfacing a lack of alignment. And that’s either a problem or an opportunity.”

A section of the program is called “insights and actions,” which are data-driven analytical casework: “If that’s true and that’s true” about a book’s sales and other factors, as McCarthy puts it, “go try one of these things” to see if a title’s performance can be upgraded.

‘Which Titles Have a Misalignment’

Initially, say McCarthy and Ruszala, a subscription may offer the chance to track, say, 50 ISBNs for a modest monthly fee, around $150, with bigger packages available. That’s because, the initial target customer, a publishing house, is expected to find OptiQly important for determining where to focus marketing attention.

This is something Shatzkin has written about on the subject, as its strategist, saying: 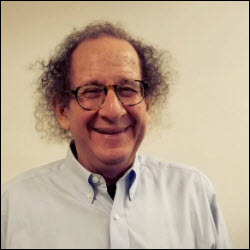 “[The product] will really be indispensable to help larger publishers figure out every morning which of their titles can yield the biggest dollar improvements with tweaks or fixes their marketers can apply today.

“It will point publishers to which titles on their list have a misalignment that, if corrected, will immediately boost sales.

“And, by title, it will tell them exactly what actions will yield results.

Once the system is up and running, subscribers will be able to use it to track performance scores for others’ titles, not just their own, a potential boon in terms of analyzing what another book is doing right or wrong—information to be applied or avoided.

And the over-arching intent here is to capture and refine the most optimal conditions for a book to be discovered and for that discovery to be converted into sales. Too frequently, Ruszala and McCarthy say, publishers just aren’t able to track enough factors and discern enough about a title’s marketplace positioning to know what’s working and what’s not.

“It’s a lot like having a bunch of people going into a bookstore,” McCarthy says, “and your book is shelved in the back, in the wrong category, maybe spine out but the spine is scratched” and unreadable.

And even if a publisher’s staff could do the kind of research it would take to check out and monitor the factors that OptiQly is meant to follow, the time commitment and work level would be prohibitive.

“OptiQly rolls it all up.” 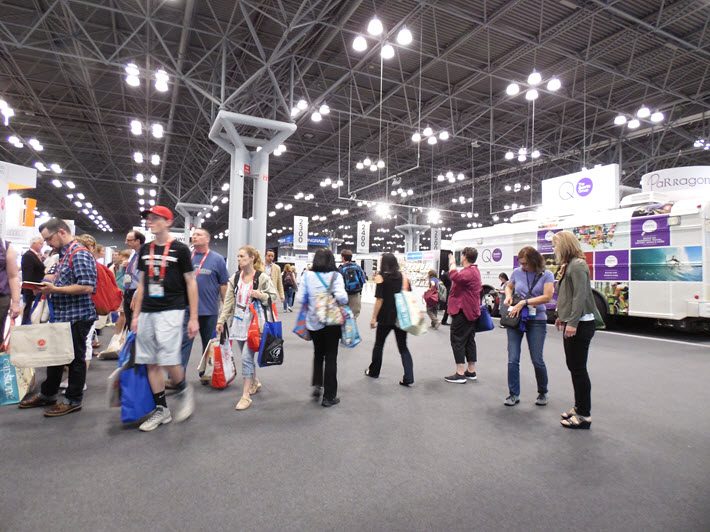 The Quarto Group bus is on the trade floor at BookExpo. Image: Porter Anderson

Porter Anderson is Editor-in-Chief of Publishing Perspectives. Prior to that he was Associate Editor for The FutureBook, a channel at The Bookseller focused on digital publishing. Anderson has also worked with CNN International, CNN.com, CNN USA, the Village Voice, the Dallas Times Herald, and other media.