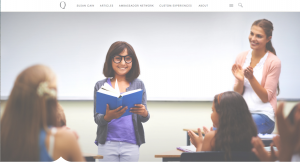 By Amy Monticello for The Quiet Revolution blog

My 3-year-old daughter, Benna, and I sit on the floor of her bedroom, having a tea party. Like much of our play, this party has rules. Conventionally, we use Benna’s pink play tea kettle and invite a rotating selection of her extensive stuffed animal menagerie, but unconventionally, we only drink “tea” from a large plastic bucket in the shape of a pumpkin that Benna used this year for trick-or-treating. The reason? Benna doesn’t want to spill any “tea” on the floor. She understands that a larger vessel is a better safeguard against spillage.

But as Daniel Tiger teaches, accidents happen. “Have some more tea, Mama,” Benna says, tipping the kettle that makes actual pouring sounds towards the bucket. And then: “Oh no! I spilled some tea!” We grab a dishtowel and clean up the invisible wetness from the rug. “All fixed,” she says, satisfied and ready to party on.

I’ve come to understand these fictitious spills as a form of safe play for my daughter, whose reaction to real spills—messes or disarray of any kind—mirrors mine. Activity grinds to a halt so that the incongruity can be rectified: the errant crayon mark erased, the drop of milk wiped from the table. My husband compares this to when, mid-sentence, I’ll get up to collect a dust bunny I spy across the room. Or straighten a lampshade. Or even out the mini-blinds. My daughter and I share this compulsive response to our environment just as we share the same underlying personality structure of which this behavior is but one small incarnation: high sensitivity.

In her seminal tome, The Highly Sensitive Child, Dr. Elaine Aron outlines the four main identifiers of high sensitivity: engaging in deep reflection, becoming easily excited or overwhelmed, having high emotional responsiveness and empathy, and noticing elusive or understated detail. In the updated 2014 author’s note, she further explores earlier research about the correlation between high sensitivity and unhappiness. “I suspected this had something to do with a person’s history, with sensitive persons being especially affected by stress when young, and that is what we found,” Aron says. “However, with a good enough childhood, they were as happy as others and perhaps even more so than others.”

When I was a child, my family gave me the nickname Sarah Bernhardt, after the Victorian-era actress whose melodramatic performances earned her equal parts admiration and scorn. Sensitive was a word frequently used to describe what my family thought were my over-the-top responses to commonplace things like the sound of bumblebees, the grit in the dentist’s toothpaste, and the texture of rare roast beef.

As a teen, I was tormented by any shift in the dynamics of my relationships, more often perceived than outright stated. Able to detect when a friend was pulling away, I’d become needy and clingy, obsessed with ferreting out my status. Even now, my mother accuses me of hearing slights that aren’t there, of making too much of a passing comment from a family member. I’ve lost countless hours of sleep to turning over such comments in my head, fixating on the hint of sarcasm, disdain, or judgment that I swore I heard in their words, however banal.

I had a happy childhood. I grew up knowing I was loved, and my sensitivity was a gateway to deep and meaningful relationships more than it was a liability in them. But I did develop a sense of myself as thin-skinned, weak-willed, and dramatic. And I’ve struggled with depression and anxiety throughout my adult life. I’ve coped in healthy ways with writing and exercise, but my coping methods have also included alcohol, marijuana, and prescription medication. One of my biggest fears is that my daughter will rely on these latter methods too.

Aron’s research offers me comfort that sensitivity need not be a lifetime sentence to mental illness, especially since my husband and I have access to emerging research that can guide our parenting. We know that yelling is not only ineffective in discipline with all kids but also likely to escalate our own sensitive child’s distress. We know to avoid peak hours at shopping malls and restaurants. When we host playdates, we know that Benna will spend the first hour or so alone in her bedroom, acclimating to the noise and activity of other children in our home. Most importantly, we know how to recognize all the gifts of Benna’s sensitivity: her ability to name and discuss abstract feelings, her unusual proclivity for sharing, her razor-sharp memory, her love and need of quiet time, her orderliness and cleanliness, her unrestricted affection for those she trusts.

But our culture’s perception of weakness in high sensitivity, and the monikers that arise from it (like calling people special snowflakes), have found new reinforcement in a growing cultural trend characterized by an overt backlash against political correctness and asylum. Particularly on social media, we see a relished mockery of any reference to safety or the protection of others’ feelings through choices in language and tone. Many Americans seem bent on building a collective thicker skin through a combination of intimidation, bullying, and gaslighting.

I am grateful that Benna is still young and that for now her parents’ influence remains the governing force of her self-perception. Research shows that peer expectations begin to supplant parental expectations when a child enters full-time schooling. In The Nurture Assumption, psychologist Judith Rich Harris stresses the importance of children’s ability to navigate their culture at large, outside the home, and thus the enormity of that culture’s impact on personality development.

With a trend towards emotional toughness, attacks on perceived sensitivity seem likely to increase, with potentially serious effects on those with high sensitivity. And yet, other repercussions of callousness might best be remedied in part by people like my daughter. In “The empathic civilization“, a TED Talk that connects human empathy to the urgency of environmental conservation, Jeremy Rifkin says that, “Empathy is the invisible hand. Empathy is what allows us to stretch our sensibility with another so that we can cohere into larger social units.” In other words, empathy, a hallmark characteristic of those with high sensitivity, could be an antidote to an increasingly fractious world that values insularity.

Not only do I want Benna to reject the notion of sensitivity as a character flaw, I want her to see it as a source of joy. Sociologist Brené Brown says that vulnerability—in her definition, a willingness to be seen—is essential to living a “wholehearted” life, and highly sensitive people often have no choice in being vulnerable. “Vulnerability sounds like truth and feels like courage,” Brown says. “Truth and courage aren’t always comfortable, but they’re never weakness.”

There’s another game we play with Benna’s stuffed animals that I privately call The Feelings Game. Benna will hold up Hedwig the Snowy Owl, or Beulah the Elephant, or her dearest friend Big Bear, and tell me what they’re feeling. “Beulah’s excited!” she’ll say, or “Big Bear is very tired.” She also tells me when they’re angry or upset. “Hedwig is sad,” she’ll say. Sometimes we give Hedwig a hug or fix her dinner, but most of the time, I just say I’m sorry that Hedwig is sad. We start with acceptance—that necessary precursor to honor, to value.

And every time, Benna will then say, “Hedwig’s happy again!”