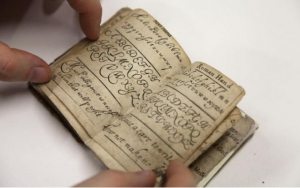 Research has shown that phonics can boost children’s reading age by an average of 28 months by the time they turn seven.

"The book offers a fascinating insight into the education and reading of young people in the 17th century," said Dr Nick Seager, a senior lecturer in English at Keele. The book was published when schools were predominately the preserve of the rich and many poorer parents educated their children at home.

Dr Seager said: "Parents could use this book with their children and children could also read it themselves. The idea of printing a book exclusively for children was new. It was also a period when books were just starting to be acquired by middle-class readers. Previously, they were the domain of the aristocracy."

For the very early learners, the guide has an illustrated alphabet, with rhymes to help young learners remember each letter. The letter 'C', for example, is partnered with a wood-cut picture of a cat playing a fiddle to dancing mice. 'D' is an action shot of how "the dog will bite a thief at night". Then 'F' is "the idle fool is whipt at school".

The copy at Keele contains the handwritten notes of its previous owners, Mary Berks and Ann Berks from Newcastle under Lyme, Staffordshire, from around 1776.

The University of Keele is a public research university located near Staffordshire, England.