Sight Words Are So 2016: New Study Finds the Real Key to Early Literacy 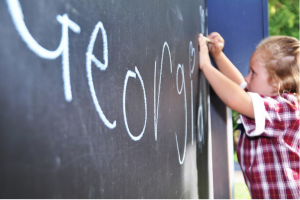 Kate Koch-Sundquist posted on April 12, 2017  Click here to read the entire article on the importance of invented spelling.

It’s no secret that teaching a child to read is a pretty big deal. Research has proven again and again that children who grasp early literacy skills by the end of first grade become strong readers for the rest of their lives, while those who struggle early on continue to do so throughout their schooling. So, no pressure, right?

This is exactly why, when it came time to choose a focus for my career in education, I opted for the upper elementary grades. Multiplying fractions? Thesis statements? Identifying the author’s purpose? Those I can handle. Reading? No, thank you.

But as the mom of two preschoolers, early literacy skills are back on the table now.

Last year, I sat across from my son’s preschool teacher as she calmly shrugged and told me that he wasn’t yet showing interest in letter recognition nor writing his own name. On the surface, I copied her even, close-mouthed smile and nodded as she assured me that this was not unusual for a boy his age. On the inside, I felt my heart pound while I mentally outlined the things I should have been doing at home to encourage his early literacy.

A year later, though, with no interventions from me or his teacher, my son began to write his name and became obsessed with letters, letter sounds, and letter recognition. He just needed the time and space to come to this understanding himself.

We were lucky that his fall birthday meant he narrowly missed the kindergarten cut off and had an extra year in preschool. We were lucky he was given the time and space to come to his own understanding in his own time.

But what happens when time and space aren’t available? What happens when children in kindergarten are pushed towards early reading, even if they are not developmentally ready?

A 2010 article in the Harvard Education Letter points out that modern children are still meeting developmental milestones at the same ages as children studied in the 1920s. That is, children’s abilities have not changed over the past century. The educational standards they’re held to have, however.

With the introduction of Common Core Standards, kindergarteners are now required to read, write, and even participate in research projects. This is a stark contrast to the play-based kindergarten of the 1980s. Is the emphasis on sight word memorization and explicit reading instruction misguided?

A new study seems to point to yes.

Published in the January 2017 issue of the journal “Developmental Psychology”, the study concludes that the most valuable early literacy skill to encourage in kindergarten is neither alphabetic knowledge nor memorization of key sight words. In fact, it’s not a reading skill at all.

The best indicator of future success as a reader is actually a child’s ability to use invented spelling as he writes.