The 7 Loveliest Children’s Books of 2017 from BrainPickings

Profound and poetic illustrated celebrations of solitude, self-possession, friendship, and our place in the cosmos.  By Maria Popova

“Anyone who writes down to children is simply wasting his time,”Charlotte’s Web author E.B. White asserted. “You have to write up, not down.” A generation later, Maurice Sendak scoffed in his final interview: “I don’t write for children. I write — and somebody says, ‘That’s for children!’” Indeed, great children’s books — the timeless kind, which lodge themselves in the marrow of one’s being and seed into the young psyche ideas that bloom again and again throughout a lifetime — radiate a beauty and profundity transcending age. They are books for all of us and for all time.

Here are seven such books published or republished in 2017, to complement the year’s great science books. 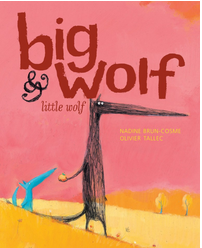 We spend our lives trying to discern where we end and the rest of the world begins. There is a strange and sorrowful loneliness to this, to being a creature that carries its fragile sense of self in a bag of skin on an endless pilgrimage to some promised land of belonging. We are willing to erect many defenses to hedge against that loneliness and fortress our fragility. But every once in a while, we encounter another such creature who reminds us with the sweetness of persistent yet undemanding affection that we need not walk alone.

Such a reminder radiates with uncommon tenderness from Big Wolf & Little Wolf (public library) by French author Nadine Brun-Cosme and illustrator Olivier Tallec, originally published in 2009 and reissued in 2017. With great subtlety and sensitivity, the story invites a meditation on loneliness, the meaning of solidarity, the relationship between the ego and the capacity for love, and the little tendrils of care that become the armature of friendship. .... 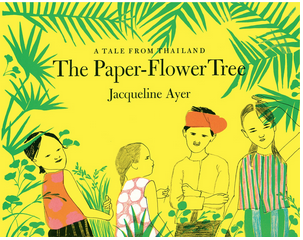 “The tree which moves some to tears of joy is in the eyes of others only a green thing which stands in the way… As a man is, so he sees,” William Blake wrote in his spectacular 1799 defense of the imagination. More than a century and a half later, illustrator and designer Jacqueline Ayer (May 2, 1930–May 20, 2012) offered a beautiful allegorical counterpart to Blake’s timeless message in her 1962 masterpiece The Paper-Flower Tree (public library) — a warm and whimsically illustrated parable about the moral courage of withstanding cynicism and the generative power of the affectionate imagination.

The Paper-Flower Tree, originally published in 1962 and now lovingly resurrected by my friends of Brooklyn-based independent powerhouse Enchanted Lion, is one of four books about Thailand Ayer wrote and illustrated, like Tolkien’s Mr. Bliss, for her own children.

It tells the story of a little girl named Miss Moon, who lives under “the enormous blue sky” of rural Thailand and wanders the horizonless rice fields with her baby brother. .... 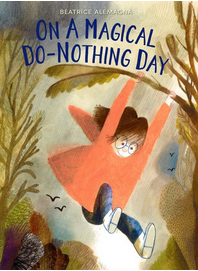 Generations of great thinkers have extolled the creative purpose of boredom. Long before psychologists came to understand why “fertile solitude” is the seedbed of a full life, Bertrand Russell pointed to what he called “fruitful monotony” as central to the conquest of happiness. “There is no place more intimate than the spirit alone,” wrote the poet May Sarton in her stunning 1938 ode to solitude. But today the fertile sanctuary of solitude is a place more endangered than any other locus of the spirit, attesting more acutely than ever to Blaise Pascal’s seventeenth-century assertion that “all of humanity’s problems stem from man’s inability to sit quietly in a room alone.”

Now comes a warm and wondrous invitation to remastering the art of fertile solitude in On a Magical Do-Nothing Day (public library) by Italian artist and author Béatrice Alemagna, translated by Jill Davis.

The lyrical, tenderly illustrated story is told in the voice of an androgynous young protagonist who grudgingly accompanies Mom to a writing cabin in the lush, rainy woods — a place oozing boredom only alleviated by a videogame.

Eventually, concerned that this will be “another day of doing nothing,” Mom commands a break from the screen. She confiscates the game and hides it, “as usual,” only to have her discontented child find it, “as usual,” and rush outside in a bright orange raincoat, game tightly clutched as some kind of protective amulet against “this boring, wet place.”.... 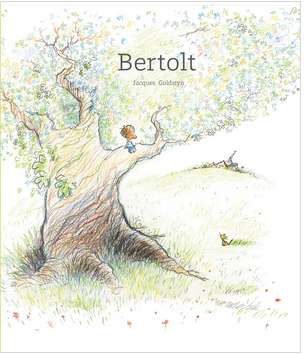 Since long before researchers began to illuminate the astonishing science of what trees feel and how they communicate, the human imagination has communed with the arboreal world and found in it a boundless universe of kinship. A seventeenth-century gardener wrote of how trees “speak to the mind, and tell us many things, and teach us many good lessons.” Hermann Hesse called them “the most penetrating of preachers.” They continue to furnish our lushest metaphors for life and death.

Crowning the canon of arboreal allegories is Bertolt (public library) by French-Canadian geologist-turned-artist Jacques Goldstyn — the uncommonly tender story of an ancient tree named Bertolt and the boy who named and loved it. From Goldstyn’s simple words and the free, alive, infinitely expressive line of his illustrations radiates a profound parable of belonging, reconciling love and loss, and savoring solitude without suffering loneliness.

The story, told in the little boy’s voice, begins with the seeming mundanity of a lost mitten, out of which springs everything that is strange and wonderful about the young protagonist. ....

He observes that while it is unambiguous when a pet has died, a tree “stands there like a huge boney creature that’s sleeping or playing tricks on us.” If Bertolt had been struck by lightning or chopped off, the boy would have understood. But that a loss so profound can be so undramatic, so uneventful, seems barely comprehensible.

It is this penetrating aspect of the book that places it among the greatest children’s books about processing the subtleties of loss. .... 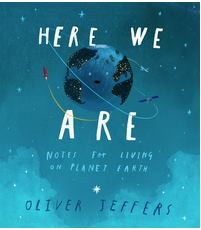 When the Voyager 1 spacecraft turned its camera back on the Solar System for one last look after taking its pioneering photographs of our planetary neighborhood, it captured a now-iconic image of Earth — a tiny pixel in a tiny slice of an incomprehensibly vast universe. The photograph was christened the “Pale Blue Dot” thanks to Carl Sagan, who immortalized the moment in his timeless monologue on our place in the cosmos:

From this distant vantage point, the Earth might not seem of any particular interest. But for us, it’s different. Consider again that dot. That’s here. That’s home. That’s us. On it everyone you love, everyone you know, everyone you ever heard of, every human being who ever was, lived out their lives. The aggregate of our joy and suffering, thousands of confident religions, ideologies, and economic doctrines, every hunter and forager, every hero and coward, every creator and destroyer of civilization, every king and peasant, every young couple in love, every mother and father, hopeful child, inventor and explorer, every teacher of morals, every corrupt politician, every “superstar,” every “supreme leader,” every saint and sinner in the history of our species lived there — on a mote of dust suspended in a sunbeam.

Forty years after the Voyager sailed into space, we seem to have lost sight of this beautiful and sobering perspective, drifting further and further into our divides, fragmenting our fragile home pixel into more and more warring factions, and forgetting that we are bound together by the improbable miracle of life on this Pale Blue Dot and a shared cosmic destiny.

A mighty antidote to this civilizational impoverishment of imagination comes from Oliver Jeffers, one of the great visual storytellers of our time, in Here We Are: Notes for Living on Planet Earth (public library) — Jeffers’s most personal picture-book yet, dedicated to his firstborn child. (The subtitle, Jeffers said, was inspired by The Universe in Verse, which he attended with his own father.) With expressive illustrations and spare, warm words, Jeffers extends an invitation to all humans, new and old, to fathom the beautiful unity of beings, so gloriously different, orbiting a shared Sun on a common cosmic voyage. .... 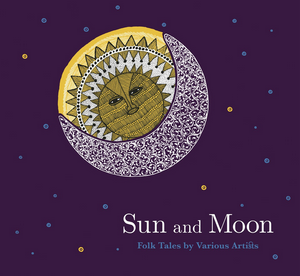 “The dark body of the Moon gradually steals its silent way across the brilliant Sun,” Mabel Loomis Todd wrote in her poetic nineteenth-century masterpiece on the surreal splendor of a total solar eclipse. Nearly a century earlier, in his taxonomy of the three layers of reality, John Keats listed among “things real” the “existences of Sun Moon & Stars and passages of Shakespeare.” Indeed, the motions of the heavenly bodies precipitated the Scientific Revolution that strengthened humanity’s grasp of reality by dethroning us from the center of the universe. But, paradoxically, the Sun and the Moon belong equally with the world of Shakespeare, with humanity’s most enduring storytelling — they are central to our earliest sky myths in nearly every folkloric tradition, radiating timeless stories and parables that give shape to the human experience through imaginative allegory.

In Sun and Moon (public library), ten Indian folk and tribal artists bring to life the solar and lunar myths of their indigenous traditions in stunningly illustrated stories reflecting on the universal themes of life, love, time, harmony, and our eternal search for a completeness of being. ....

This uncommon hand-bound treasure of a book, silkscreened on handmade paper with traditional Indian dyes, comes from South Indian independent publisher Tara Books, who for the past decades have been giving voice to marginalized art and literature through a commune of artists, writers, and designers collaborating on books handcrafted by local artisans in a fair-trade workshop in Chennai, producing such treasures as The Night Life of Trees, Drawing from the City, Creation, and Hope Is a Girl Selling Fruit. .... 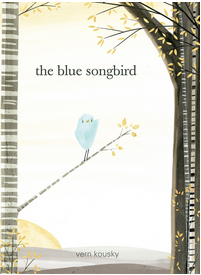 “This is the entire essence of life: Who are you? What are you?” young Tolstoy wrote in his diary. A generation later on the other side of the Atlantic, pioneering astronomer Maria Mitchell wrote in hers as she contemplated the art of knowing what to do with one’s life: “To know what one ought to do is certainly the hardest thing in life. ‘Doing’ is comparatively easy.”

How we arrive at that secret and sacred knowledge is what Brooklyn-based artist Vern Kousky explores in The Blue Songbird (public library) — a lyrical and tenderhearted parable about finding one’s voice and coming home to oneself. With its soft watercolors and mellifluous prose composed of simple words, Kousky’s story emanates a Japanese aesthetic of thought and vision, where great truths are surfaced with great gentleness and simplicity.

We meet a a young blue songbird on a golden island, who listens to her sisters’ beautiful songs each morning. Unable to sing like they sing, she anguishes that there seem to be no songs for her in the world.

Her wise and loving mother counsels the blue songbird to “go and find a special song” that she alone can sing. ....

For the complete text and illustrations in this amazing article, go to Maria Popova's website at  https://www.brainpickings.org/2017/12/17/best-childrens-books-2017/