23. Be Inspired by Ashley Bryan!

I was one in the fortunate audience at the 1987 Florida Library Association Conference, immersed in this man's performance of the magical book Jim Flying High by Mari Evans, illustrated by Ashley Bryan. The experience is clearly imprinted on my mind's eye. His spirit is imprinted on my soul, as is his love on my heart. By the time I reached the front of the line to his table, copies of the book were sold out. Mr. Bryan began taking orders and checks from the rest of us.

Shortly after the conference, the USPS brought my copy with his inscription:

Ashley Bryan doesn’t speak his stories, he sings them, fingers snapping, feet tapping, his voice articulating. His entire body is immersed in the tale.

Ashley Bryan himself tells us his secret for inspiring our hearts:

At every moment I strive for connection. If you are in the moment, you are stretching out to reach that which you recognize in others. That’s my secret. —  Ashley Bryan

As Mari Evans says, "Then everybody draw a deep breath and we all be happy too!"  "WE BE FAMILY." 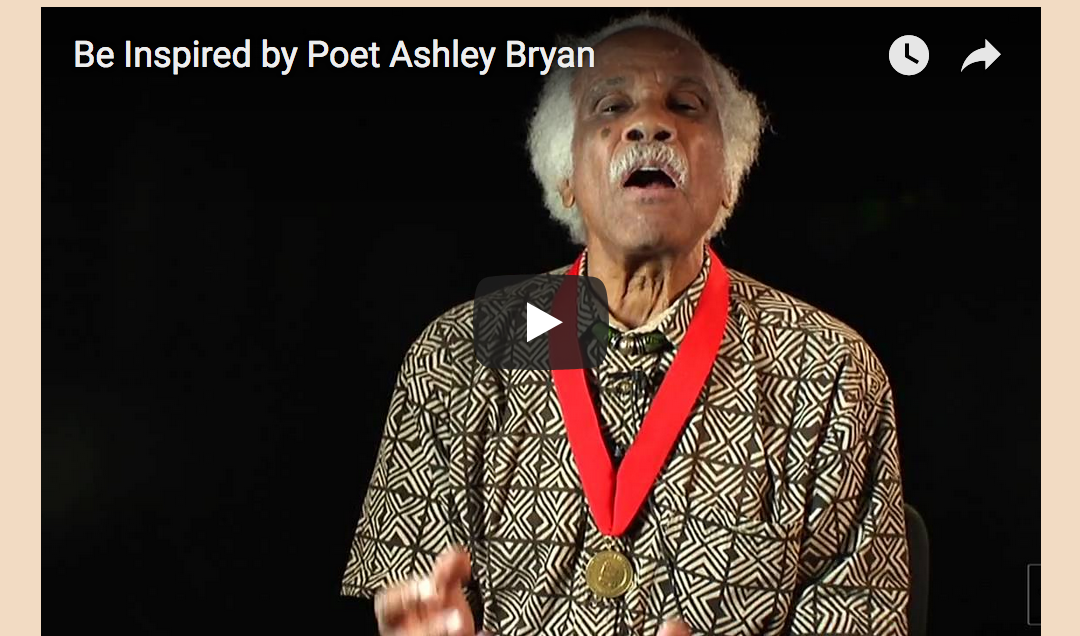 Born in 1923, Ashley was raised in the Bronx, NY. At seventeen, he entered the tuition-free Cooper Union School of Art and Engineering, having been denied entry elsewhere because of his race. Encouraged by supportive high school teachers, Ashley was told, “Apply to Cooper Union; they do not see you there.” Admission was based solely on a student’s exam portfolio.

Drafted out of art school into the segregated US army at age nineteen, Ashley preserved his humanity throughout World War II by drawing, stowing supplies in his gas mask when necessary. After the war, Ashley completed his Cooper Union degree, studied philosophy and literature at Columbia University on the GI Bill, and then went to Europe on a Fulbright scholarship, seeking to understand why humans choose war. In 1950, renowned cellist, Pablo Casals, agreed to break the vow of silence he had taken after Franco came to power in his native Spain. Ashley was permitted to draw Casals and his fellow musicians during rehearsals in Prades, France, where Casals was in exile. Through the power of Casals’ music sessions, something “broke free” for Ashley: “I found the rhythm in my hand.”

Ashley returned to the United States, teaching art at several schools and universities, retiring in the 1980s to Maine’s Cranberry Isles as professor emeritus of Dartmouth College.

Writes his editor, Caitlyn Dlouhy: He had discovered a hole in children’s literature. There were no introductory books of African American spirituals. There were no stories from the African oral tradition. The translations he found were academic. Dust in the throat. … He couldn’t duplicate the oral traditions of Africa, so he set out on a mission to create something for a new audience: beautiful books to be read and shared aloud … Ashley had bridged time and space, bringing past and present together to create a new voice, born of an ancient one.

Among Ashley’s awards are the Coretta Scott King–Virginia Hamilton Lifetime Achievement Award, Laura Ingalls Wilder Medal, and the New York Public Library’s Literary Lions award. Throughout the United States and Africa, libraries, children’s rooms, and literary festivals are named for him. As much as Ashley is humbled by these honors, it is the joy of creation, the excitement he sees in children’s eyes, that delights him most.

*Caitlyn Dlouhy’s words are taken from her article, “Ashley Bryan” in The Horn Book Magazine.