FROM Publishing Perspectives: In Feature Articles by Alastair Horne April 6, 2017 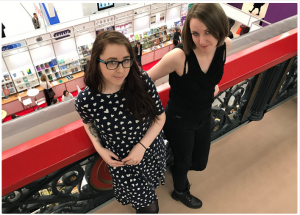 In the space of nine months, the independent Scottish publisher 404 Ink has gained extensive media coverage and an endorsement from Margaret Atwood for its Nasty Women anthology of essays on womanhood today.

Publishing Perspectives spoke with 404 Ink founders Laura Jones and Heather McDaid at last month’s London Book Fair. Jones and McDaid are in their mid-20s, and both of 404 Ink’s publications so far–Nasty Women and the first issue of an eponymous six-monthly literary magazine–have used crowdfunding models. The magazine gets donations through the Patreon subscription service, and the anthology was funded by a Kickstarter campaign that raised nearly four times the £6,000 (US$7,496) initially requested.

Publishing Perspectives is a leading source of information on the international book publishing business.