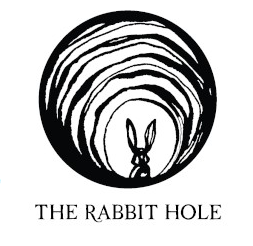 The Rabbit hOle, the proposed “explor-a-storium” in Kansas City envisioned by artists and former booksellers Deb Pettid and Pete Cowdin, is becoming a reality with the recent purchase of a 165,000-square-foot warehouse that will become the project’s permanent home. The building, in an industrial area north of downtown that is undergoing new development, cost $2.2 million.

The Missouri Development Finance Board recently approved the Rabbit hOle nonprofit organization’s application for $2 million in state tax credits which, on top of the $2.4 million accumulated through grants and fundraising, enabled Rabbit hOle to purchase the building.

The Rabbit hOle is scheduled to open in its permanent home in 2019; initially, it will contain 60,000 square feet of programming and exhibition space.

Two years ago, Pettid and Cowdin closed The Reading Reptile, the Kansas City bookstore they had owned for 28 years, launched a nonprofit arts organization, and focused their efforts on building a museum modeled on San Francisco’s Exploratorium and St. Louis’s City Museum that would allow visitors to immerse themselves in classic children’s literature via interactive three-dimensional galleries, installations, and exhibits created by professional artists. 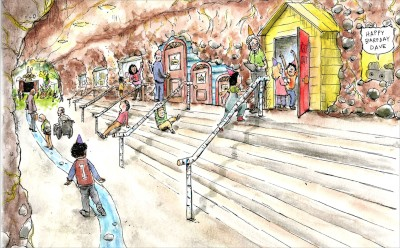 Artists Charlie Mylie and Nicholette Haigler’s rendering of the front entrance of the Rabbit hOle.

The mission of the Rabbit hOle is to “create new readers on an unprecedented scale” in a world where “only around 50% of parents read aloud to their kids on a regular basis.” Readers “of all ages and all abilities” are invited, the mission statement declares, “to engage with the book and long-form narrative in playful, artistic new ways,” with the promise that experiencing stories in such a tactile way will “change lives and change the way we think about literacy.” The name pays homage to Lewis Carroll’s beloved Alice in Wonderland.

The Rabbit hOle will also house a printing press and bindery, a bookstore, a resource library, and a theater. Programming will include performances, maker workshops, writing and story labs, professional development for educators, and a full slate of national author events and residencies.  There will also be regularly scheduled presentations and workshops led by touring authors and illustrators to complement the full-scale 3-D installations, which will change every three or four months.

“In addition to its investment value, location, and overall accessibility,” Pettid stated in a release, “the property is a perfect fit for the project in terms of initial space-needs and anticipated growth patterns. [The area] is rapidly becoming a natural extension of downtown Kansas City and a cutting-edge destination. As a national destination and the first major cultural institution for children north of the river, the Rabbit hOle will not only benefit from, but help to advance current growth and development in the area.”