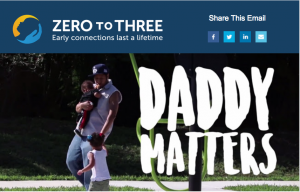 ZERO TO THREE has teamed up with YouTube star La Guardia Cross to create “Daddy Matters,” a 4-part web series that launches today with new episodes every Friday through the month of June. We’ll kick things off with a Facebook Live tonight at 7pm Eastern. Please join us!

Daddy Matters explores why dads matter and what matters to dads. La Guardia is the creator of New Father Chronicles which captures life with his adorable young daughters. His candid and always comedic take on life as a dad has drawn millions of engaged viewers and sparks lively conversations on his social media channels. La Guardia was named to Ebony’s Power 100 list and is a leading national voice for dads.

Daddy Matters episodes are supremely entertaining and at the same time serve as great discussion-starters about important ways dads support their children’s early development. Check out episode 1 that addresses the adjustment to fatherhood and learning from the inevitable mistakes all parents make.

One of the best ways to support young children is to support their parents. Cross and ZERO TO THREE hope viewers will tune in and use the Daddy Matters series as a way to start important conversations to help dads get the respect and support they deserve. More information is available at zerotothree.org/DaddyMatters, and everyone is invited to join the conversation on social media with #DaddyMatters.

Daddy Matters was inspired by previous ZERO TO THREE research.

Dads love fatherhood, are more engaged with their kids’ development, and crave more conversations with each other. Ninety percent of dads say being a parent is their greatest joy, and 73 percent say their lives began when they became a dad. More than half (54 percent) say “I love you” more and 47 percent read more to their child than they recall their own parents did. Still, six in 10 fathers agree that dads don’t get enough credit for their involvement in raising and caring for young children. Dads want to hear and learn from each other about the challenges and the triumphs and everything in between. Learn more: Tuning In: Parents of Young Children Tell Us What they Think, Know and Need.