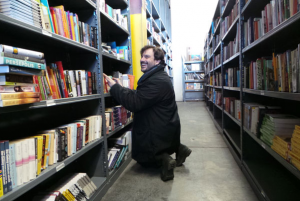 Cyril Hadji Thomas, the co-founder and CEO, in one of the company’s warehouses

Bookwitty has been quietly positioning itself to become a possible global competitor to Amazon in online bookselling. The company, which is based in Paris and has 11 offices around the world (including in Beirut, Dublin, and Montreal), has sold some 10 million print books over the past five years and offers about 27 million print titles in English, French, German, and Spanish—all with free worldwide shipping.

Bookwitty was created in 2007 as a partnership between Levant Distributors, a book distribution company founded in 1950, and Keeward, a technology company, both based in Beirut. Initially, Bookwitty sold books through third-party booksellers on Amazon. “In 2006, we saw that we were getting orders for Arabic books in Europe and French books in North America and, with Amazon, saw there was an opportunity to expand into selling books in multiple languages in the broader international marketplace,” said Cyril Hadji-Thomas, Bookwitty’s cofounder and CEO. “The focus for us quickly became long-tail print book sales, as this, we realized, was something the big players already in the market were not interested in pursuing.”

Two years ago, the company launched its eponymous retail website and has since focused on attracting customers through English-language content marketing; the site offers a robust program of editorial content, often in the form of book lists tied to a timely topic, news event, or niche subject area, that highlight titles for sale. Last year, the company added a French-language retail site. In addition to operating its own online store, Bookwitty, through its partnership with Keeward, has worked with more than 30 bricks-and-mortar booksellers around the world, offering web development and white-label online retail solutions; these partners include Albertine in New York City, Payot in Geneva, and the Antoine bookstore chain in Beirut. The company is also expanding its retail partner network and currently distributes books around the world for more than 150 partner organizations, from wholesalers to media groups.

“That number is growing at 20% per month,” Hadji-Thomas said. “The key advantage for us is expertise in logistics. We have warehouses in the United States—in Valley Stream, New York—the U.K., France, Lebanon, and the Ivory Coast, and, if we spot a fast-growing market, we have the technology to set up a warehouse quickly.”

In the first half of this year, Bookwitty reported having sold 1.7 million books to customers in more than 150 countries. “Our volume is spread out across many countries—mostly individual orders, because we often sell product that is not widely available,” Hadji-Thomas said. He highlighted the company’s ability to source books from countries in West Africa as something unique in global online bookselling. “We tend to do well with expats, people who want books they cannot easily get in their local market,” he added. “We do well in places like Australia and Asia, particularly Hong Kong and Singapore, in addition to the usual core marketplaces where we are based.”

In 2016, Bookwitty merged with Keeward and Levant Distributors into a single entity, operating under the name Keeward Group Holding, and raised $10 million in financing; the combined group had revenue of $65 million in 2016 and anticipates reaching $100 million in revenue for 2017. As for what’s next, Hadji-Thomas said, “We are exploring Latin America as a whole and think Mexico and Brazil, in particular, look promising.” In the meantime, Bookwitty is looking to raise another $20 million in financing.

“Our overall purpose is to help extend the market for books,” Hadji-Thomas said. “Amazon is the market maker for many countries around the world, but we feel that, by focusing on the long tail and not the 2%of books that are bestsellers, we can offer a viable alternative for customers who are looking for products they might not otherwise easily procure. We feel we can compete and, what’s more, we are giving our partners the tools and support they need to compete. It’s a win for the supply and distribution chain around the world, and a win for the customer.”

A version of this article appeared in the 10/30/2017 issue of Publishers Weekly under the headline: The Globalized Niche Bookseller