“Books are the DNA of our civilisation….” Baroness Rebuck of Bloomsbury, DBE 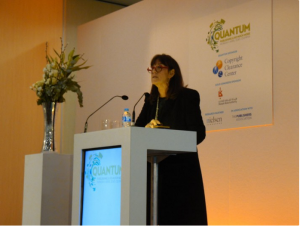 We need ‘the confidence to explore the alchemy’ of young talent and technologists’ input, the Baroness Gail Rebuck tells London Book Fair’s Quantum Conference — not a ‘civil war’ in publishing. Image: Porter Anderson

“Looking back” on the mergers that led to the establishment of Penguin Random House, the Baroness Gail Rebuck — PRH Chair and non-executive Director of The Guardian Media Group — has told the Quantum Conference in her keynote on the eve of London Book Fair that “it makes the relationships between the ruling families of Game of Thrones seem easy to follow.”

Here is the text of her keynote address from that conference, in full. Like those ruling families in George R.R. Martin’s saga, she says, “we’re still not sure if and when winter is coming.” And in publishing, she says, “the old is simply learning how to co-exist with the new.” — Porter Anderson

The Curious Incident of the Book in the Digital Age

When [London Book Fair Director] Jacks Thomas asked me to speak at the London Book Fair, she casually suggested I might address Publishing and the Author: Past, Present and Future and do it in 15 minutes!

I’ve tried to bring some focus to that vast landscape under the title of The Curious Incident of the Book in the Digital Age – “curious” because while the incredible revolutions we’ve lived through in the last 20 years may seem to have changed everything, when you really get down to it, nothing has changed at the core of our industry — it’s still stories and the people who create those stories — the authors — that underpin everything.  It’s their imagination that inspires and moves readers and makes publishing much more than just another industry to work in — publishing is not to have a job but a vocation.

Books are the DNA of our civilisation, an unbroken line of stories, ideas and knowledge which essentially completes our relationship with all of humanity and with ourselves.