Book sales fall and rise, swayed by trends and the success of individual titles 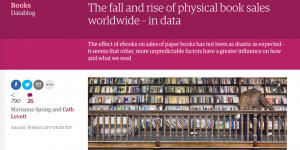 Nielsen, which tracks book sales in several countries, released 2016 figures to coincide with this week’s London Book Fair. They show a mixed bag: physical sales are up in the UK, US and Ireland but down in Italy, Spain, Australia and South Africa.

It seems the UK and US can thank a year of political turbulence in part for their increase in print sales. In the UK, parodies such as Five on Brexit Island, as well as children’s titles and lifestyle books, helped sales climb by 2.3%. In the US, religious and self-help titles contributed to a 1.3% rise. Read the article in The Guardian.