For Parents and Teachers 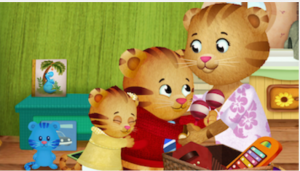 Help your child learn life's little lessons with songs and tips.
Explore a library of Daniel Tiger's Neighborhood songs, paired with tips, to help your little one learn and grow. This new free app for parents from PBS KIDS (available in English and Spanish) is now available on iTunes or Google play.

View this fun post by Hilary Cook on Storypark blog

You don’t have to spend a lot of money and time creating exciting sensory and play materials for children to spend hours exploring with touch, language and imagination.

LeVar Burton on How to Instill the Love of Reading 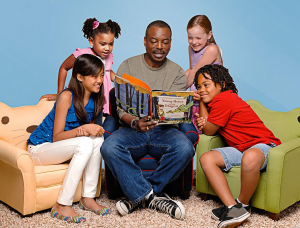 Philip Pullman said that "after nourishment, shelter, and companionship, stories are the thing we need most in the world." Any person breathing knows this to be true. From telling stories around the fire, to the invention of the printing press, to binge-watching Netflix, our culture has always revolved around stories.

It is through stories that we define our world and discover our place in it.

To be literate is to be on the pathway to becoming a lifelong learner, and literacy is essential if we're to have educated individuals and a truly free society.

How Do We Inspire Our Kids to Love Reading? Read his advice HERE!

73% of Parents Read Aloud to Infants and Toddlers

73% of parents with children ages birth to 5 say they started reading aloud to their kids before age 1, with 30% beginning before the age of 3 months.
54% of children ages birth to 5 are read aloud to at home 5-7 days a week.
75% of parents with children 6-17 say strong reading skills are “the most important skill a child can have.”
The most frequent readers ages 6-17 are kids who read for fun and have parents who read often.  86% of their parents say reading books for fun is very or extremely important.

The link below takes you to free downloads of colorful graphic posters including “Read Aloud: Start Early & Keep Going.”  Data is from “Kids & Family Reading Report, 5th Edition” a survey conducted by Scholastic Inc. and YouGov between August and September 2014, which polled 506 parents of children ages birth to age 5, 1026 parents of children ages 6-17 and one child age 6-17 from the same household.  Report findings are summarized in an article by Carolyn Sun in School Library Journal on January 8, 2015, titled “Scholastic’s New Report Examines Kids’ Attitudes on Reading.”

Poet Laureate of the United States, Robert Hass (1995), wrote: "Reading aloud to children must be one of the richest of human transactions. The child is having that first experience of the sustained power of its own imagination that opens up whole worlds, inside and outside, and having in it the voice - its own and not its own, the parent's and not the parent's - from which it first learned the rhythm and inflection and play of human language. We all remember this: the experience is a huge thing, deeply intimate and wonderfully impersonal. For the parent reading to the child it is a chance to renew his or her own adult experience of poem and story and to be companion to the child's experience, which seems so alert, even in sleepiness, so without walls, because, I guess, a child's imagination dissolves them so freely. In this way, it contains one of the great powers of parenting; it's like being alive twice."

"In children under 2, the concern is with learning and cognitive development.  Learning occurs mostly through interaction with adults," says Dr. Kristen Copeland, lead author of a new study presented at the Pediatric Academies Societies meeting in May 2011 in Denver, CO.

The American Academy of Pediatrics currently recommends that children under 2 in child care watch no TV at all.  The AAP also suggests that children over age 2 in childcare should watch TV no more than once a week, and for no more than 30 minutes per week.  For more information, go to www.aap.org

Explore children's literature together. Sit close enough together so all can see the pictures and words. Point to things on the page. Repeated often, a child will recognize that reading together opens a door to beauty and adventure. This is not a small thing. Indeed, it lays a foundation for a love of the pursuit of knowledge and wisdom.