41. Panic For Fun And Profit: Submission Deadlines And My Book Series by Scott McCormick

Published on May 1, 2018 | In Blog, How To Begin Writing For Children, Recommended Books | 0 Comment 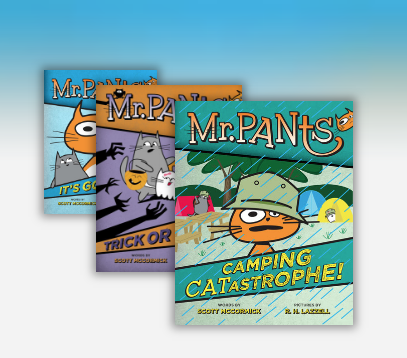 Mr. Pants Series by Scott Mccormick and R. H. Lazzell  A laugh-out-loud comic hybrid series about the antics of three goofball cats, perfect for beginning readers and fans of Bad Kitty and Squish.

Maybe you don’t need panic-induced adrenaline to write, but I do. That’s why my agent’s submission deadlines were the best thing for my book series.

My agent called. “Scott, good news. Your publisher wants two more Mr. Pants books.” To say that I was surprised would be an understatement. After all, my first book, Mr. Pants: It’s Go Time, hadn’t even been published yet. “The only thing is,” he continued, “they need a finished manuscript in two weeks.”

It had taken me three months to write book two, and I hadn’t even started from scratch. I had started from a few short stories I had left over from writing book one. But here I was, with just two weeks to write a book, and I didn’t have any (good) Mr. Pants stories in the tank; just a discarded attempt at a book that was tentatively called The Camping Catastrophe.

So: Two weeks to produce a 128-page graphic novel from scratch? There was no way.

Then the panic set in. It felt great.

Panic as a motivator

Hemmingway wrote every morning. Most successful authors seem to have similar habits. I can’t. I’ve tried. I just get frustrated.

Sometimes I get lucky and an idea will just come to me and I’ll rush over to my computer (or whip out my phone) and start banging away until I have taken the idea as far as I can. But those moments of inspiration are rare.

Instead, I need a deadline. I discovered this in college. I wrote every single paper at the last minute — not because I was procrastinating, but because I literally couldn’t write unless I was in a state of panic.

When I’m calm and happy, it’s hard for me to push myself to write creatively. But when I’ve got just two hours to come up with a major ad campaign for my whale of a client? The adrenaline kicks in, the ideas start flowing, and my mind goes to weird places.

Knowing this, I tell my clients to give me a hard, short deadline for everything. Sometimes they forget, or they tell me there’s no rush. “That won’t work,” I tell them. “Lie to me. Tell me you need it Tuesday. Bonus points if you use the phrase ‘mission-critical.’”

After hanging up with my agent, I thought about the amount of money I could potentially blow if I didn’t turn my manuscript in on time. It was a glorious thought. I was giddy from panic.

My mind zipped from idea to idea. All of them were terrible. Then, out of nowhere, my mind went to one of those glorious weird places. I thought of Dawn of the Dead, the 1978 zombie classic that was so gory the MPAA threatened to give it an X-rating, forcing George Romero to release it without a rating. It was one of my favorite movies.

“That,” I said, fully embracing the state of panic-logic, “would make a great children’s book.”

Running out of time

My editor called me the next day to discuss my ideas. I told her about Camping Catastrophe, since that was the concept I was closest to having finished. In the day since hanging up with my agent I had figured out everything I needed to finish that book: I had the basic concept and I knew the arcs for all of my characters. All that was left for me to do was, you know, write the book. But I knew I’d be able to get that done in time. After all, I was in panic mode.

My editor liked the camping idea, but she worried about the publication date. Book three was scheduled to come out in the fall, and she was concerned that this story would be more suited to a summer release, when more people camp. She asked me what else I had.

I had nothing else. But I couldn’t say that. And before I could stop myself, I said, “Have you seen Dawn of the Dead?”

In the movie, the main characters are trapped in a mall. As a tween, when I first saw the film, I remembered loving that whole notion of having a mall as my personal playground. So, I launched into a spiel about how it might be fun to have Mr. Pants and family trapped somewhere like a mall, or, as I suggested, an airport.

To my chagrin, she liked the airport idea. I asked her to like the camping idea.

We ended the call with her saying she’d run the two concepts by her boss and get back to me. But I was running out of time.

All thanks to panic

Unfortunately, agents aren’t often calling me with these tight deadlines. In fact, it’s happened exactly once.

But I still need that sense of panic to write. So, if I want to write something creative, something that doesn’t have any actual deadlines, I have to find ways to trick myself.

One trick I have used in the past is to write with a partner. That’s how the Mr. Pants books came into being, I teamed up with an illustrator friend of mine and I made him give me deadlines.

But I’ve also learned to team up with other writers, even if we’re not working on the same project. They write their book, I write mine, and we check in with each other at the same time each week to share what we’ve been writing. I usually put off writing anything until 5 pm on the day before our meeting. I have an alarm on my phone, which gives me that, “Oh crap! It’s Tuesday already?” feeling so my mind can go where it needs to go.

Knowing that someone else is depending on me is enough to give me a reason to panic.

I didn’t have time to wait to hear back from my editor, so I decided to finish Camping Catastrophe. It took me about six days or so to write the first draft and another two days to for the rewrite.

I was rather happy with it.

My editor called. She said exactly what I knew she would say. They definitely wanted the airport story.

“I finished Camping Catastrophe,” I said.

I had four days left, and I had nothing to work with but some vague notion that my characters would be trapped in an airport.

I spent a day and a half trying to figure out one important thing: Why were they at the airport? Where were they going to? Or coming from? More importantly, what did Mr. Pants want?

In (basically) every work of fiction, your protagonist needs a goal. That’s what drives the story forward. In book one Mr. Pants’ goal is to play laser tag. In book two he wants to make a movie. In Camping Catastrophe he wants to join a Boy-Scout-type organization. But I struggled to figure out what he wanted or needed in this airport.

I couldn’t think of anything. I had a bunch of false starts, but they were all terrible.

I was way beyond panicked. I was losing it.

Frantically searching for ideas, I went back to the reason why my editor didn’t want Camping Catastrophe. Timing. Book three was scheduled to come out in the fall, and she had thought the camping story would be more appropriate for the summer, which is when book four would come out. OK, I thought, what else happens in the fall?

And then it hit me: Halloween.

That one word unleashed a torrent of answers. At once I knew why my characters were at the airport. I knew what Mr. Pants wanted. I even knew how to get in a nice shout-out to Dawn of the Dead, by having my characters play an airport-wide game of zombie tag. It all came together, and I was able to finish my manuscript in just four days. My editor loved it. Mr. Pants: Trick or Feet was published a year and a half later and even got a write up in the New York Times Magazine.

All thanks to panic.

Maybe you don’t need panic-induced adrenaline to write. That’s great. But if you’re feeling uninspired or you just want to try something new, give it a shot. Set up a deadline somehow. Make the consequences of failure significant. Embrace the panic. Let your mind go to weird places. And start writing.

SCOTT MCCORMICK AND R.H. LAZZELL: ALL THE WONDERS, EPISODE 262

Scott McCormick (@I_am_Mr_Pants) and R.H. Lazzell (@rhenrylazz), author and illustrator team behind Mr. Pants: Camping Catastrophe and other books in the Mr. Pants series, stop by the podcast to talk about breaking convention, kids who never read, and how to remain funny.

Thanks for listening to All The Wonders: The Children’s Book Podcast! If you enjoyed this episode, subscribe to the podcast on iTunes or on the Stitcher radio app. There you’ll find an archive of every episode of the podcast. You’ll also have an opportunity to leave a review or some stars. If you do, hugs and high fives are coming your way. Thanks for inviting us into your ears and for your support!