26. Looking for an Agent? Twitter Events Connect Agents and Writers

While authors have been making initial connections online with agents for several years, since author Brenda Drake launched the Pitch Wars contest in 2012, Twitter events have exploded in popularity in the last year or two. Besides #PitMad, the Twitter offshoot of Pitch Wars, these days authors and agents can establish a connection via #DVPit (for diverse books), #PitDark (horror/mysteries), #PBPitch (picture books), #KidPit (children’s literature, from board books to YA), #SFFPit (Science Fiction and Fantasy), and other hashtags.

“All these wonderful books I was seeing in Publishers Marketplace, and they weren’t submitting to me, because they didn’t know I wanted manuscripts in their genre,” Jessica Sinsheimer, an agent at the Sarah Jane Freymann Literary Agency, recalled. Since she launched #MSWL on Twitter in 2013, which has morphed into a website with a searchable database and an online writers academy, the hashtag has become a generic short-hand in the industry for agents’ wish lists. “I knew other agents in the same boat. Why not tell the world what we want? We have the technology.”

While agents all have their wish lists, many say that the Twitter events yield better results than simply posting what they would like to see in queries from writers. “[Twitter events] give us an opportunity to see something we may not have seen in our queries,” noted New Leaf Literary agent Suzie Townsend. 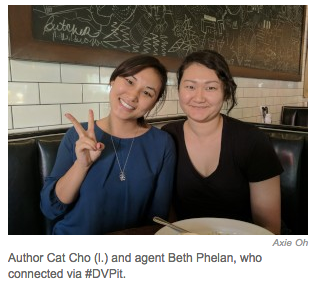 Kat Cho, a Korean-American writer based in Chicago who is the author of a YA fantasy novel, Gumiho, inspired by a Korean fable, pointed out that many writers are unable to attend conferences and other networking events, due to geographic, financial, physical, or other limitations. Twitter events makes pitching more accessible to people from a variety of diverse backgrounds. After participating in the first #DVPit in 2016, Cho signed on with Beth Phelan, now with Gallt & Zacker Literary Agency, who launched that Twitter event while she was at the Bent Agency.

“It’s great being able to do this from the comfort of your own home,” Cho said. “A lot of people can’t afford to go to pitch events in person. There’s so much knowledge concentrated in New York City, but writers are everywhere.”

#PitMad and #DVPit: The ‘Gold Standard’

Twitter pitching has become so popular, in fact, that several agents disclosed that they avoid social media fatigue by being extremely selective as to which Twitter events they follow. Every agent contacted by PW who accepts children’s books, however, said that they follow #PitMad and #DVPit, describing both as well-organized events with a focus, rather than simply, as Janklow & Nesbit agent Brooks Sherman puts it, organizers “blasting” tweets at agents and “wasting your time—not just agents and editors, but also wasting the time of writers.”

“How is this Twitter contest going to elevate material you are not going to otherwise see?” Sherman explained that he asks himself before participating in any social media event. Sherman’s cautious approach towards social media has paid off: he has found several clients there who have subsequently nabbed lucrative deals with large houses, most famously New York Times bestselling author Angie Thomas (The Hate U Give). More recently, after initially connecting last year with Jennifer Dugan on #DVPit, Sherman sold at auction this past summer her debut YA novel, Hot Dog Girl, to Putnam in a two-book deal.

#PitMad is, in the words of several agents, the “gold standard” in terms of Twitter events, and is held quarterly, for a day each time. Writers describe their completed and unpublished projects in 280 characters or less (up from 140 characters previously, thanks to Twitter’s relaxation of its character count). Agents tweet their own preferences and can scroll through the tweets, indicating their interest in projects by “liking” the tweets they want to know more about, and bypassing the others. Authors then follow up by submitting according to that particular agent’s guidelines. While #PitMad is the general hashtag, due to the quantity of submissions, writers are instructed to include age categories and genre/subgenre hashtags along with the #PitMad hashtag to make it easier for participating agents—as well as, increasingly, editors at publishing houses—to refine their searches.

“It’s a whole new way to see a larger amount of premises in a short amount of time,” #PitMad team member and author Heather Cashman explained. She stated that #PitMad was created to accommodate writers who were unable to participate in Pitch Wars, which is by-invitation-only and highly competitive. While Cashman, who monitors the Twitter feed, hesitated to quantify how many writers participate in #PitMad each quarter, she estimates that “tens of thousands” of tweets are generated each time. #PitMad’s website contains testimonials from more than 40 writers who have obtained representation via #PitMad, although there are many more. Cashman said that the organizers do not keep track of their successes. 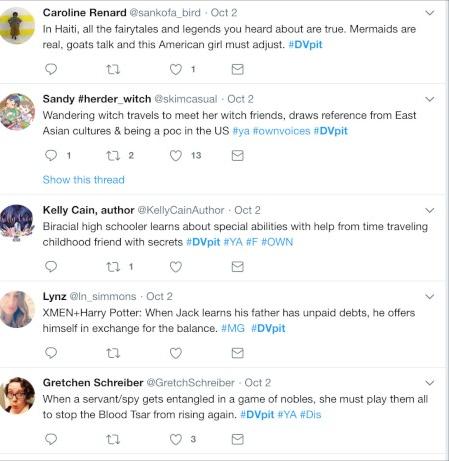 Sherman praised #DVPit for being “one of the best organized Twitter events out there,” and several agents agreed. Phelan of Gallt & Zacker launched #DVPit in 2016 to focus upon “marginalized authors and illustrators only” on an honor basis, according to its website, because, Phelan told PW, she “wanted to get more diverse authors published, as one agent, can’t do it all.” #DVPit is held twice each year, in April and in October. The first day is devoted to children’s and YA, and the second to adult projects. Participants must use the #DVPit hashtag as well as at least one category or genre hashtag. Like #PitMad, agents and editors are invited to “like” tweets they are interested in, so that authors can follow up according to that agent or editor’s submission guidelines.

To date, close to 60 writers have found representation via #DVPit, and 17 of those have landed publishing deals, including Claribel Ortega, whose most recent project is a middle grade novel, #Ghostbook, inspired by Dominican folk tales. Ortega signed on with New Leaf’s Townsend, who in November sold #Ghostbook to Scholastic. Ortega said that she’d sent out traditional queries with no luck before participating in #DVPit, where she received more than 50 “likes” from agents and, subsequently, seven offers.

“It was an amazing process for me,” Ortega said, noting that there is “a sense of urgency” among agents, which results in a “fast process.” She described the benefits of this kind of pitching for writers, especially those from a diverse background, like her, who might suffer from a lack of self-confidence because they do not regard themselves as being “part of that world.” The only downside to Twitter pitching, she admitted, was that it was “so public: there was added pressure to do well because everyone is watching.”

Noting that “condensing a manuscript to just [280] characters is difficult,” Phelan emphasized that #DVPit is “all team effort.” A group of authors, including, at this time, Rebecca Barrow, J.S. Fields, Lana Wood Johnson, and Judy Lin, are available to do “practice runs” with writers—who are randomly selected via their tweets— and critique their pitches.

“It gives [writers] a confidence boost,” Townsend said. “Sometimes editors will see tweets and tell writers they’d love to see [the project] when they get an agent.” In fact, Townsend added, the visibility of these unpublished projects is “a cool way to get buzz going really early.”

Townsend, as well as the other agents, predicted that social media events connecting agents and writers will continue to evolve and only grow more refined. But, she added, while “Twitter isn’t going anywhere, I don’t think the slush pile is going anywhere either”; the majority of her clients still come from the slush pile.

Social media “has not replaced querying; you still have to have that query letter,” Phelan pointed out. And as for writers who express some trepidation over the possibility of their idea being stolen if they put it out there on social media, #PitMad’s Cashman said that she responds to such fears by pointing out that “their idea might be unique, but they’re going to have to get it out there. Don’t you want agents and publishers seeing this idea? If not, you can go ahead and just query.”