in Licensing Hotline: December 2017 by By Karen Raugust for Publisher’s Weekly, posted on Dec 21, 2017

Simon & Schuster Children’s Books is partnering with pocket.watch, a start-up content producer, and distributor whose YouTube channel exceeds one billion views per month as of November. “We’ve been looking at YouTube closely and trying to discover patterns about how kids are watching and finding new content,” said Valerie Garfield, v-p and publisher of novelty and licensed publishing. “We wanted to take a step back and learn first before jumping in.”

When pocket.watch came on the scene, the publisher felt it was ready and the property was right. “We wanted to partner with a media company that has a presence on YouTube and is creating and curating content for kids across all media. We felt this was a more measured approach to this type of publishing. It’s not about getting a billion views and then going away. We’re joining them in creating content and shaping it for a publishing program.”

The platform is aimed at children 2–11 and features properties ranging from traditional-style TV shows to social media influencers, including some of the biggest names around (e.g. HobbyKidsTV, EvanTube, and Ryan Toys Review). “These are solid brands with loyal followings. They’re not viral sensations,” Garfield said. “They’ve built an audience over time. The wide range of content was extraordinarily appealing to us.”

In addition to acquiring content for its YouTube channel, pocket.watch is creating programming that crosses into all media, from YouTube to video gaming to traditional TV. “The terrain is shifting in how kids are finding content, and the boundaries between platforms are changing,” explained Garfield.

Books, which are still in development, will highlight individual properties, but everything will be identified with the pocket.watch brand. “We want people to see that the book was produced in conjunction with pocket.watch, so they know it is vetted and appropriate. YouTube is kind of the Wild West, and there’s a hesitation to let your kids loose on the internet. But this is culled content; we’re not just pulling something off the internet and throwing it into the books.”

The first pocket.watch titles will debut next fall; details are expected to be finalized by February. “With this kind of publishing, time is of the essence,” Garfield said. “We won’t have as much time as we usually have to ramp up. We’re setting up processes now so we can get to market fast.” The program will include traditional licensing formats as well as biographies and other nonfiction, original stories, and more.

Random Expands Nick Jr. List for the Little Ones 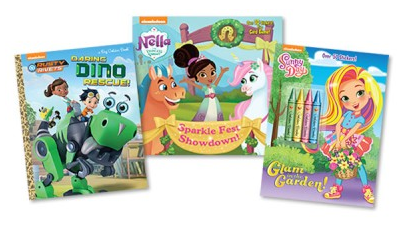 Nickelodeon has been successfully expanding its preschool programming over the past few years with a raft of new shows. The network’s master publisher, Random House, is along for the ride.

“All of Nickelodeon’s new preschool properties have done really well, and it’s not just Paw Patrol. Blaze and the Monster Machines and Shimmer & Shine have done great too,” reported Chris Angelilli, RH’s v-p, editor-in-chief, and executive director, licensed publishing. “Nickelodeon does an incredible amount of research on the target audience and has an amazing understanding of what preschoolers and their parents are looking for, as the success of its preschool properties shows.”

Among the recent Nick Jr. properties on Random House’s list is Rusty Rivets, which premiered on the network in August 2016. Based on a toy line from Spin Master (also the originator of Paw Patrol), the show, which integrates a STEM curriculum, is about a 10-year-old boy who solves problems by building mechanical inventions—including a robotic dinosaur—from spare parts. Random House followed with a full complement of preschool formats in July of this year.

Meanwhile, the publisher began releasing titles for Nella the Princess Knight in spring 2017, following the debut of the TV series in February. “It’s about a girl who is as comfortable wearing a crown and tiara as she is with a sword and shield,” Angelilli said. “And her best friend’s a unicorn. It doesn’t get any better than that.” Themes include girl empowerment, friendship, and conflict resolution.

Newer programs include Sunny Day, which premiered on Nick Jr. in August, with entrepreneurship, problem-solving, and self-expression at its core. “Sunny Day is a 10-year-old who owns her own salon and uses creativity and sometimes hair products to solve problems,” Angelilli said. Publishing will launch in January. And Top Wing, produced with Industrial Brothers and 9 Story Media Group, launched last month online. “It’s about a rescue squad of birds that uses teamwork and amazing vehicles to save the day.” The first books release next summer.

Most of the publishing programs are similar in terms of formats, with readers, 8x8s, sticker-activity books, and the like being the focus. “We have core formats that work really well in the preschool space,” Angellili said. “We stick to the tried and true. But when there are specific themes we try to find a format that fits.” He cited a jacketed picture book by Nella creator Christine Ricci as an example. “It’s a real storybook property, so it was natural to launch with something like that.” Similarly, Rusty Rivets has a building-themed sticker-puzzle book among its titles.

Nickelodeon continues to expand its preschool slate. And, outside of the preschool realm, the network is debuting a new Teenage Mutant Ninja Turtles animated series next year. Random House will add to its extensive Turtles list with titles tied to the new show. 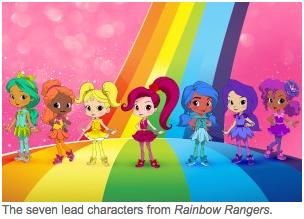 Macmillan Children’s Publishing Group’s Imprint division is developing its first licensed publishing program for preschoolers. (Imprint also has a Sesame Street title coming up, but it is a gift book for adults.) The company recently acquired the global master publishing rights from Genius Brands for a line of books tied to Rainbow Rangers, an animated series to air on Nick Jr. Imprint had previously teamed with Genius Brands on SpacePOP.

“A lot of publishers do a lot of great stuff for preschool, so we wanted to wait for the right thing,” said Erin Stein, Imprint’s publisher. “This was the one for us.”

The property, which Stein believes is likely to attract viewers in the 3–7 age range, features a team of seven girls with diverse ethnicities, each representing a color of the rainbow. “Who doesn’t love rainbows?” she asked, adding, “It has a good, layered story and attractive, colorful artwork, and the palette isn’t all pink and purple. The rainbow broadens that a little bit.”

The series also features themes of kindness and respect, concern for the environment, and especially friendship. “In each episode different combinations of characters navigate a challenge, but also their relationships with each other,” Stein explained.

The publishing program, which will debut in spring 2019 following the fall 2018 premiere of the TV show, will include traditional tie-in formats such as readers and 8x8s, as well as a picture book. “I’m excited to play up the rainbow aspect and the adorable look of the show through original artwork,” Stein said.

She hopes to cross-promote the books with other licensees of the property, as happened with SpacePOP. Manufacturers creating products for Rainbow Rangers to date include Mattel for toys; Bentex, Handcraft, Global Design Concepts, and H.E.R. for apparel and accessories; Jay Franco for bed and bath, and Taste Beauty for health and beauty products. 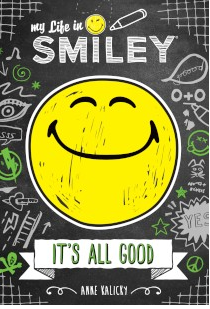 Next April, Andrews McMeel is publishing the first of two middle-grade novels based on the Smiley property, the happy-face precursor to today’s emojis. The book came to AM through the original publisher and SmileyWorld licensee Les Livres de Dragon d’Or of France, where the Smiley characters are particularly popular. Dragon d’Or launched the series in 2016 and will publish the fourth and fifth titles next year.

Big Nate, also produced under license, was the first middle-grade series Andrews McMeel ever developed, according to Kirsty Melville, president of AM’s book division. “We’ve kept the spirit of that publishing program in everything we’ve done for that age group since then. It’s a combination of humor and a look at what it means to be alive at that age,” she said. “Smiley definitely had that spirit. We also liked the emotional intelligence element and the fun entertainment factor, combined with a well-known brand.”

The first novel, My Life in Smiley: It’s All Good, is written as the illustrated diary of 11-year-old Max, who uses the Smiley characters to explore his emotional journey. “We thought the story of the daily struggle of life at that age, along with the humor and positive messages, would resonate with kids and parents,” Melville explained, adding, “The story was strong enough to have universal appeal.”

Scholastic is adding the Cutie Cars die-cast vehicle brand to its Shopkins publishing program…. St. Martin’s Press is publishing the first cookbook for the Margaritaville brand, inspired by Jimmy Buffet’s songs and lifestyle…. Radio Flyer partnered with I See Me! for a personalized children’s book…. Insight Editions will publish journals, posters, postcards, greeting cards, and other products featuring imagery from the Outlander TV series…. Rizzoli International Publications will publish wall calendars for Poldark, licensed by Knockout Licensing…. Family Friendly Productions and Knockout have licensed Litographs for totes, posters, scarves, and t-shirts and Cotton Babies for printed cloth diapers based on the Little House on the Prairie lifestyle brand…. C3 Entertainment licensed the National Day Calendar, which promotes and markets occasions like National Puppy Day and National Pizza Day, to Calendar Holdings for distribution of wall calendars through mass distribution. C3 also licensed Fantoons Animation Studio for coloring books and collectible art prints for The Three Stooges.